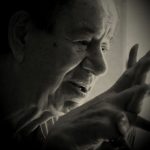 More than a Portuguese poet, Alberto Pimenta is since early on, a poet of Europe. He is also a poet whose linguistic, cultural and even mythological knowledge of the continent as a whole and of some of its countries in particular, enables him to adopt a poetic-political positioning not only as a questioner, but also as a forecaster of the European destinies. If, for many years, this poet, fictionist, dramaturg, essayist, performer, television protagonist of “Arte de ser Português” [The Art of Being Portuguese] was sent into oblivion, the tendency has been – although without an accommodation on the author’s part – to a growing interest in the reading and studying of his work. To speak of Alberto Pimenta, is to talk about politics criticising the powers-that-be, such as the Church, the State, capitalism. And Europe, more exactly the European Union, could not escape unscathed, having frequently been present, either in a more elegiac form, or in a more analytical or premonitory register.

Pimenta goes to Heidelberg (Germany) in 1960 as a Portuguese language lecturer at the service of the Portuguese state. However, he was fired three years later due to his strong opposition to the fascist regime, but he was hired by Heidelberg University, where he worked until 1976. He was sixteen years away from Portugal, from the dictatorship and from the country, returning only two years after the 25th April 1974 Revolution. His first essays book, O Silêncio dos Poetas [The Silence of the Poets] (1978) was initially published in Italian, with the title In Modo Di-verso [In a Verse Mode] (1983), in Salerno; Adan (1984) is published in Spain; Verdichtungen [Concentration] (1997), in Vienna. The Discurso sobre o Filho-da-Puta [Discourse on the Son of a Bitch] is translated into Spanish, French and Italian.

Apropos of titles, the “Homilíada de Joyce” [Joyce’s Homily] (in Joyciana, with Ana Hatherly, E. M. de Melo e Castro and António Aragão) dialogues either with Joyce, or with the tradition of classical epopees. In 1986, his second anthology – Metamorfoses do Vídeo [Video Metamorphoses] – remits directly to the work Metamorfoses [Metamorphoses], by Ovid and, in 2006, the title Imitação de Ovídio [The Imitation of Ovid] dialogues again with the classical author. In all of his work, either in the more humoristic moments, or in the most elegiac ones – like Marthya de Abdel Amid [Marthya of Abdel Amid] (2005) or Indulgência Plenária [Plenary Indulgence] (2007) –, the references to Greek and Roman mythologies (but also the Finnish and the German ones) are a constant and a symptom: Alberto Pimenta never stopped being a poet of Europe, in what concerns the intercultural references that populate the universe of his writing. The presence of these references is very clear in the sense that it is transversal and constant in all of Pimenta’s work.

However, when Europe invades critically and politically concerning the thematic, the poet’s perspective is seldom idyllic. Quite the opposite, there is a noticeable a disenchanted vision that starts by being satirical, making use of a caustic humour, namely at the turn of the millennium and in the adoption of the common currency, but it darkens, becoming melancholic, maybe in a more revolted posture before a fate that was already guessed in previous books and that was confirmed and intensified. As early as 1977, in Ascensão de Dez Gostos à Boca [The Ascension of Ten Flavours to the Mouth] we can read in the small poem “Les polichinelles” [The Buffoons]: “side by side / the two heads of state / pose for the future / with a gesture from the past” (1977: 30). Hereafter, all the logic seems to be as follows: a repetition of history, in what Pimenta calls the IV Reich, but this time with another king of covert formalities, strategies for a different control society more dedicated to positive impulses, to euphoric political slogans that border on the publicity discourse. In the book IV de Ouros [Four of Diamonds] (1992), the poem “Nas esplanadas do Chiado” [At Chiado’s Esplanades] brings a quasi-Homeric discourse for a new Europe that is drawing near: “The delegation of the Pastoral Tourism has just published the small book «Rotas da Fé» [Routes of Faith]. I recommend that you follow some of the routes, so that you may conscientiously pray for the construction of the Europe of fraternity among peoples” (idem: 37).

In 1998, the year prior to the euro’s insertion in the financial markets, the book As Moscas de Pégaso [Pegasus’ Flies] includes a short but caustic poem, on euro’s Europe that is already perceived as being intolerant and standardised: “let us speak about the euro: / because there are those who do not work / as much as they should” (1998: 27). In the same year, it is published Ainda Há Muito para Fazer [There Is Still a Lot To Be Done], one of the long poem-books of Alberto Pimenta, in which the references to the European Union, to the common currency, to the European Bank, to the repetitive official financial discourse are constant and rife with hollow expressions, clichés and foreign words that Pimenta subverts with linguistic satirical manoeuvres so common in his work:

of course, the contribution

of the common currency

to an integrated space

where one has to manage

in the degree of the solution

that is, of liquidity

[…] these should also be

after the inevitable outsourcing

In 2000, two years before the euro entered into circulation, another long poem-book, this time intitled Ode Pós-Moderna [Post-Modern Ode], crushes the euphoric discourses around the single currency, already with a pessimistic vision on the forthcoming new Europe. Starting by the graphic aspect, we see on the book’s cover the symbol of the currency (€) and all the page numbers are encircled by the European Union’s stars. The discourse is significantly more dysphoric, and at the end of the book he leaves space for no doubts: “store / also open on Sundays / caulked ship / with no more interpretations / on the way to its iceberg / place without borders / so / with no escape route left” (2000: 57).

Hereafter, if the vision of Europe was already disenchanted, the discourse increasingly transpires that image, with less humour, less satire, more clarity and a tone perhaps more elegiac. In Prodigioso Acanto [Prodigious Acanthus] (2008), a history of Europe is told through its great buildings and monuments, better yet, it is told the concealed history of the workers and prisoners who perished building them (a bit in Brecht’s style), repeating the “no / there is nothing here to sing about / just wars / disenchantments / mismatches” (2008: 31). In De Nada [Nothing] (2012), there are barbarian attitudes and an empty labyrinth (without Apollo, Orfeo, Prometheus, Daedalus, Minotaur), a Europe that goes on losing its references to remind itself and repeat only the worse of itself. In the same book it is said: “single currency / it is called cum / […] / the workers’ supply / makes work cheap / enables progress and / growth” (idem: 30).

Even more recently, the book Nove Fabulo, o Mea Vox / De Novo Falo, a Meia Voz [I Speak Again in Low Voice] (2016), enduring so much fatigue I dictate in low voice, brings an absolutely demolishing poem – “Entre o Norte e a Morte” [Between the North and Death] –, about Europe of borders, of refugees, of faceless and nameless death, of the non-people, of “us and the others”, ending with “That is later, / gold is always first. / Afterwards it is the euro / and then death” (idem: 57).

That is Europe as seen by Alberto Pimenta. A Europe that forgets history, a Europe of numbers above people and dignity, of calculation above openness and honesty, of hate above fraternity, of fear above the courage to build together. Or, as the author would say in As Moscas de Pégaso, “it is easier / than Hitler thought” (1998: 27)?

Writing the May God Keep you this year, I see in the horizon the year of 1993, in which the European Single Act will come into force.

We are aware that we are protagonists of some years that will deeply mark history. Until this moment, the Community’s great projects have had the economy as the main engine.

When one is dealing with the regulation of the states’ rights and duties, it is the economic dynamics that sets the tone. For the time being, the political and cultural instances carry less weight.

What about human relations? Human relations cannot be regulated by an Act and yet, they undergird everything. Poor us if everything was limited to a structural basis.

Being aware that it befalls to our generation to be co-founder of a new Europe, let us be it with Christian responsibility.

The Pastoral Tourism delegation has just published the booklet «Rotas da Fé». I recommend that you follow one of these routes, so that you can pray consciously for the construction of a Europe of fraternity among the peoples.

instead of the virtual

have got a broken head

or in eye-catchy agony

when knocking at their former door

by the chosen ones of the

but they never purported

to deny it or conceal it

behind duplications of their own drunkenness […]”

let us talk about the euro instead:

because there are those who do not work

as much as they should.

one day will have to start

to assume their debts,

if these barbarian attitudes

without Apollo and Orfeo

Daedalus and the Minotaur

if there is no other way

the solution may be

that one exchanges these stones

or in the lack thereof

he is still there