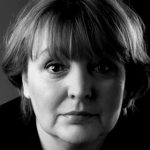 Dubravka Ugrešić, the winner of the Neustadt Prize for International Literature (2016) and author of several essays, novels and short fictions, challenges the usual rating of literature by the authors’ nationality. Dubravka Ugrešić was born in the former Yugoslavia and became a Croatian citizen after the country’s disintegration in the 1990’s. However, Ugrešić quickly showed her total disagreement with the new establishment’s nationalist and xenophobic course very soon, wherefore, in 1993, she changed Croatia for exile, first in Berlin and later in Amsterdam, where she has been emigrated for more than 20 years.

Although she has continued to write in Croatian, her works have always been published in English translations and have been regarded as one of the most relevant cases in European literary writing explicitly “transnational”, or even “a-national”, signed by an author averse to any devotion to patriotism.

In novels such as The Museum of Unconditional Surrender (1998) and The Ministry of Pain (2005), the melancholy and irony features of post-Berlin Wall Fall stand out, mostly pierced by lives of disappointment and exile (Mendes  2014). In spite of the autobiographic background, it is about narratives, or “autobiographic fragments” (Karpinski 2013) that do not renounce the fictional construct enhanced by the author’s high conscience and her literary expertise, especially concerning the Russian vanguards. In the essayistic field, Dubravka Ugrešić has consistently focused on the reflection both of the emergence of new states underpinned by ideological and commercial imperatives (Ugrešić 2011: 22), and the efforts for updating and recovering the audiences of cultural events of post-modernist (con)fusion, particularly in the post-communist societies of the so-called Eastern Europe, as in “Post-Communist Practice: Valentina and Emir” (idem: 45-55).

Despite having been insulted by the Croatian press as one of the “Croatian witches”, accused of treason and “Yugonostalgia” and of being an “internationalist lounge” author (idem: 218-219), Dubravka Ugrešić has been critical of the very same things she has been accused of and, above all, a shrewd analyst of contemporary culture – from literary culture to mass culture. Her intervention in these fields is assumed as a personal resistance to the official attempts at seizing the collective memory and the post-communist euphoria, as well as an exposure of some phenomena like the “Yugonostalgia” that, as the author points out in Europe in sepia, have become a mere mass commerce and a strategy of conciliation of oblivion (Ugrešic 2014: 11-12).

Moreover, her “portrait in sepia” of Europe is very much significative of her dysphoric vision of the European social, political and cultural universe, for living mostly in the past, without real future perspectives. In 2013, the author wrote that Europe and the rest of the world have become a chaotic “mega-market”, a “Circus”, i.e., a global entertainment (idem: 101), which is not more than a metaphor for the generalised chaos and insanity. It is also important to note that for this vision of Europe, it is very relevant the forthrightness with which, as early as Karaoke Culture, Dubravka Ugrešić analysed the European literary system, completely invaded by American mass culture (Ugrešić 2011: 169).

Interestingly, her experience in the writers’ train trip that crossed Europe in 2000, seems to have contributed to that melancholic, when not sarcastic, vision of European literature and the literary festivals, regarded as another show of the kind of the Eurovision Song Contest, a perspective the author develops in several passages of her Nobody’s Home, namely in the chapter “Europe, Europe” (Ugrešić 2007:99-120).

Conscious of the perverse effects of the division between “central literatures” and “peripheral literatures” in Europe, making the former the promoters of universal ideals and relegating the latter to the domain of local specificities (idem: 185), the author imagines other forms of writers’ association in the European space, beneath and beyond  nationalities, so much so, that there has been a growth  in Europe of zones of  liminality, interstitial literary spaces (Ugrešić 2011: 172).

It is in this sense that Dubravka Ugrešić will address the (im) possibility  of a «Republic of kakanian literature», which, although it could be a reminder of the cultural construct surrounding «Central Europe», or  «Mitteleuropa», that some time ago raised enthusiasm in writers such as, Milan Kundera, György Konrád, or Joseph Brodsky,  it is, in this case, imagined as a space where writers would be compulsorily deprived off any duties of national, religious, or ethnic representation, their admission  being  determined only through their own literary work (Ugrešić, 2011: 296). This happens not to dodge a reflection on contemporary reality, but in order not to abdicate of the independence of a critical eye with which one analyses and describes, almost always in a bipolar way, today’s world. Dubravka Ugrešić is, above all else, as pointed out David Williams, a writer who, whatever the style, is conscious of the responsibility of being just that: “[…] an author who when making jokes makes sure she has her turn on the receiving end, when mourning or moralizing questions her right to do so, and who when serving up satiric indictments has her own name appear among the accused. In a less anonymous and less liquid epoch, these things might have been called the responsibility of the writer” (apud idem: 324).

“Most of the culture of Europe came out of the vortex of these fundamental oppositions, from the dynamics of center and periphery, metropolis and the provinces, the palanka and the world. […] Culture has taken the place of the mumbo-jumbo of European political lingo and substance, and, hey, the main substance of European unification has suddenly become culture. Culture is the ideological Euro, the means of communication […]

So what is culture , then? Culture is a phenomenon that serves for all sorts of things, from money laundering to laundering the collective national conscience, […]”  (Ugresic 2011: 295)

“The idea of ‘culture against money’ is essentially religious. Culture is bout money just as religion is, after all. My fellow travellers from the Literaturexpress Europa 2000 did not fail to understand this. Grumbling about their joint public statements, about every manipulation of political engagement, about acting as a group, they gave the upper hand to the words: image, publicity, network, lobby, and management, and at the end of the trip, they made a joint public statement after all. It was essentially a statement about the practical nature of a writer’s work, about future transactions from one language into another, packaged in the unity through diversity brussels ideology.” (Ugresic 2007: 120)

“European «cultural identity » – whatever that means – is «threatened » by the pervasive American industry of mass culture; with the East Europeans who are awaiting acceptance , each toting their cultural bundle; and with emigrants of the non-European cultural circle – most painful point, by the way, of the European cultural subconscious – whose numbers are rising ominously with every passing second” (idem: 169-170)

“Lately I’ve caught myself turning the faces and hues of Central Europe into photographs, an automatic click on an internal camera and I’m done. A second later an iPhoto program whirrs inside me: import-effects-sepia-done.  It’s as if the surrounding reality is a screen , stuck to my hand an invisible remote with three options:past, present, future. But only one of them works: past, sepia.” (Ugresic 2013: 19)

“What messages does the European today send out to the Europe of tomorrow?

If one were to ask me, as a writer I would , perhaps predictably, immediately think about human beings, of a record of everyday human lives, something akin to a perfect ( and perfectly monstrous!) archive for future readers, its files taking account of the smallest details of the lives of regular, anonymous people, like the archive of Danilo Kiš’s  The Encyclopedia of the Dead, inspired by a newspaper report on the Mormon archives.” (idem: 77-78)

— (2011), Karaoke Culture, translated from the Croatian and with an Afterword by David Williams), University of Rochester, Open Letter.

— (1998a), The Museum of Unconditional Surrender, trans. Celia Hawkesworth, London, Weidenfeld and Nicolson.

— (1998b), The Culture of Lies, trans. Celia Hawkesworth, London, Weidenfeld and Nicolson.

— (2013), Writing Postcommunism, Towards a literature of the east european ruins, Palgrave Macmillan.