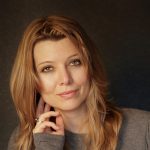 Elif Şafak is the most widely read female novelist in Turkey. She was born on October 25, 1971, in Strasbourg. After her birth, her parents divorced and she was raised by her single mother. She uses her mother’s name as her surname (Şafak). She finished her education in different places because her mother was a diplomat. She focused on the contribution of women for literature. Her masters’ thesis won a prize from an association of Social Sciences. When she was studying for her masters’ thesis, Şafak wrote her first storybook, Kem Gözlere Anadolu, and her first novel as well. She has published 16 books so far, ten of which are novels. Her main areas of interest are Istanbul, feminism and women rights, freedom of speech, global politics, mysticism, East and West. She presented herself in a TEDxGlobal session with the following speech: ‘’I am an Istanbulite, but I’m also attached to the Balkans, the Aegean, the Mediterranean, the Middle East, the Levant. I am European by birth, by choice, the values that I upload. I have become a Londoner over the years. I would like to think of myself as a global soul, as a world citizen, a nomad and an itinerant storyteller. I have multiple attachments, just like all of us do. And multiple attachments mean multiple stories.’’ She believes for the construction of one’s identity politics divides but fiction connects. She thinks that literature and fiction are the flowing water of life as they affect our preferences, our life choices. She explains the differences between the West and the East to make comparisons and justify her observations. For example, she says that the West think of themselves as solid, safe and stable. Her Western side believes that the other side (East) should increase their level of feminism, activism and human rights. The specialty of Elif Şafak is using mysticism in her books. For instance, every moment, every situation and every protagonist have some kind of connection, and at the end of the book, the author explains what such connections represent. She is a member of European Council on Foreign Relations and an ambassador of the Culture Action Europe campaign. In 2014, she won second place, with honours, on the Prix Escapade France. Two years before that Şafak had been nominated for the International IMPAC Literary Award, with The Forty Rules of Love.

The stories in the novels of Elif Şafak are based on different nationalities, cultures and countries. Multicultural perspective becomes a matter of primary importance in the novels of the author. Besides this, nationality is given minor importance in these novels. Nationalism and being a Turk in the novels of Şafak are not based on the common definition of nationality (Kırımlı 2010: 261). An example of this is her 1999 novel, Şehrin Aynaları (Mirrors of City). It was the first time she used her post-modern style. She mentioned many different parts of Europe and European culture, not forgetting Ottoman and Turkish culture as well. Every reader can probably feel identified with something in this book. At the same time, Şafak also analysed the society and successfully presented her analysis. Şehrin Aynaları begins in the end of 16th century in Madrid, Spain and continues to Istanbul. During the story, the author refers to many different places, characters, religion and historical events such as the Inquisition, the fear rules, the rebellion to Church… The hero of this book is Alonso Perez de Herrera, who incites Christians against people of other denominations. Other significant heroes are Antonio and Miguel Pereira. They symbolise the family tradition and the high status of the society. This story moves on to different places, with protagonists taking refuge within Jewish communities in the Ottoman Empire. This story is also embedded in mysticism: Şafak’s protagonists are accompanied by magic, djinns, demons and guardian angels on their way.

Elif Şafak published Araf (The Saint of Incipient Insanities) in 2004. In this book, the reader can find young people who come from different religions, different cultures and different backgrounds. This story takes place in Boston. When Elif Şafak mentioned the gathering of all the characters, showing everyone’s new life paths, she also refers the loneliness, what it feels to be an outsider, not speaking the same language. The literal translation of this novel’s Turkish name is ‘’The Purgatory’’, which could make one think that its protagonists couldn’t be Western people in the East or Eastern people in the West. Simultaneously, this Turkish title also refers to the 7th surah of the Quran and Dante’s Divine Comedy. In this novel, Elif Şafak is quite successful in showing the differences between East and West as the reader can easily understand and keep up with her ideology. The author always repeats some significant issues such as the use of the spoon, chocolate, or the time differences. By the end of the novel, the author goes deeper into the actual meanings of these themes. Şafak chose the status of her protagonists very carefully and she connected them with their cultural identities, their foreignness, their belongings and their ambiguities. She tried to show the main problems of Turkish Westernisation within society.

The relation between East and West is also one of the themes in Iskender (The Honour), firstly written in English and then translated to Turkish (2011). Iskender is the Turkish name of this book and the name of hero as well. This hero, Iskender, is the symbol of Şafak’s own masculinity. The author was raised without her father, which had many implications on her development and on her quest for a position of power. In this book, Şafak created an idealized manly version of herself with Iskender. In this book, the author highlights violence against women and Sufism. At the same time, she mentioned conflicts of traditional vs. modern lifestyle, Eastern-Western problems, feminism, identity, dualism and immigration. Şafak is an activist for Women rights. Consequently, in every book she writes about women, women rights, as well as oppression or violence against women. Iskender tells the story of immigrants and of the honour killings of a Turkish family who had immigrated to London. The heroine, Esma, has some characteristics from the author herself too. Esma tries to establish a balance between her traditional upbringing and the modern world and she desires to become a writer. Şafak also tries to explain the balance of East and West from the perspective of women. She said ‘’East, West, South or North makes little difference. No matter what your destination, just be sure to make your journey, a journey within.’’ (TedXGlobal)

Elif Şafak continues addressing the relation with the West, uniting past and present in Aşk (The Forty Rules of Love), initially written in English, then translated into Turkish. Published in 2010, the novel was translated into many different languages, to become an international bestseller. The novel describes the wars caused by love and the sadness of divine love. Şafak has tried to create a spiritual love relationship similar to the earthly love of Şems and Mevlana. Their Sufism forms described a new life for the heroine, Ella Rubstein. Both stories together concrete Rumi’s timeless message of Love. The novel intelligently tells the story of four people: two from 13th century’s Turkey and the other two from our modern-day, 21st century world. Aşk opens a new world to Ella as it has done to Rumi eight centuries before her. In this novel, Love means freedom. Her language is amazingly poetic, filled with flows of thoughts. Aşk brings together East and West, past and present, by showing how love makes the world move.

Havan’nın 3 Kızı (Three daughters of Eve) was written in 2016. Firstly, Şafak wrote this novel in English and then translated it into Turkish. This novel evaluated the differences between Turkey and Europe from today and from yesterday. The three daughters of Eve are Peri, Mona and Shirin. In this novel, Peri faces a void in her soul. When she gets to Oxford University, her best friends are Mona and Shirin, even despite their differences: Shirin is an atheist and is confident, while Mona is modest and religious. Şafak calls them the Sinner, the Believer and the Confused. The centre of the story rests on Peri’s relationship with a teacher at Oxford, who pushes his students into deeper and deeper inquiries into the nature of God. This novel tries to explain the process of the West and East, the faith and the absence of faith, as well as the relationship between science and God.

Elif Şafak continues her activities as a women’s right activist. In addition to her work for freedom of speech and literacy, Şafak is known as an advocate for minority rights and LGBT rights. She currently lives in London. She prefers to call herself a nomad. Her body lives in London but her soul is attached to different parts of the world. Her nomadism is a quest to find how the East meets the West.

It was my tenth rule: East, West, South or North makes little difference. No matter what your destination, just be sure to make every journey a journey within. If you travel within, you’ll travel the whole wide World and beyond.

It is another one of the forty rules: The quest for Love changes us. There is no seeker among these who search for Love who has not matured on the way. The moment you start looking for Love, you start to change within and without.

I recalled another golden rule: It’s easy to love a perfect God, unblemished and infallible that He is. What is far more difficult is to love fellow human beings with all their imperfections and defects. Remember, one can only know what one is capable of loving. There is no wisdom without love. Unless we learn to love God’s creation, we can neither truly love nor truly know God.

Love is the water of life. And a lover is a soul of fire!

Selma nodded – notwithstanding, she had noticed other things when she looked around: students guzzling beer in a corner, a woman in a skimpy dress that might as well have been a camisole, a tattooed man fondling his girlfriend, whose cleavage was deeper than the rift between Selma and her husband… how would she be able to leave Peri all alone amidst these people? Westerns might be advanced in science and education and technology, but what about their morals?

Selma looked disapprovingly at the girl’s short skirt, high heels, heavy makeup. To her eyes, she didn’t look like student. And she surely didn’t look Iranian

Europe has been printing books since the Middle Ages […] I mean, Iran, Turkey, Egypt. Okay, I get it, rich cultures, lovely music, good food. But books are knowledge, knowledge is power, right? How can the gap ever be closed? […] Gutenberg’s press dates from around 1440. A few Arabic books were published in Italy in the 1550s. But it was with Mütefeerikka in the Ottoman Empire that Muslims started printing -under heavy censorship, of course.

Afterwards we went to Portugal. I liked it there, but not Baba. Still smoking, complaining. Two years in Lisbon, just when I’ve learned enough Portuguese, bam! Pack up, kids, we’re going to England, the Queen’s waiting!

Motherlands are beloved, no doubt; sometimes they can also exasperating and maddening. Yet I have also come to learn that for writers and poets for whom national borders and cultural barriers are there to be questioned, there is, in truth, only one motherland, perpetual and portable. Storyland.

How to quote this entry: