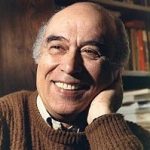 Fernando Gonçalves Namora was born in Condeixa-a-Nova. His bibliography includes around thirty titles comprising novels, narratives, biographies, chronicles and writer’s notebooks. He was awarded numerous literary prizes and his works were translated into several languages and countries. Presently he figures side by side with the best novelists of the Portuguese Neorealism, although he embraced the existential novel as of Cidade Solitária (1959) [Lonely City] and, especially, since Domingo à Tarde (1961) [Sunday Afternoon]. Dostoyevsky, Tolstoy, Huxley, Sartre, Camus and, in particular, Malraux, are the main European voices one can hear in Namora’s novels and essays. The romanticised chronicle Diálogo em Setembro (1966) [Dialogue in September] inaugurates the travelling writer phase that marks, not only, his bibliography, but also the Portuguese language’s travel literature in the second half of the 20th Century. Indeed, for Eduardo Lourenço, this book is “the finished monument of our secular provincial fascination regarding Europe and its overcoming in terms of an open and adult interaction” (1978: 200). Because “an encounter with the others is the true encounter with ourselves” (idem: 201). While José Manuel Mendes observes in him “establishing a cycle in which, be it or not a consequence of Namora’s growing international reputation, he undertakes the search for geographic-civilizational spaces hitherto unrevealed and what that entails in questioning, comparability, inquiry, around the enigmas, of the meaning of life, such as, the confrontation of the auctor [author] […] and his limits and insolvencies, his designs” (2004: 17).

Namora’s inaugural trip abroad occurs in 1952, when he visits Belgium, France and, especially, The Netherlands, of his juvenile imaginary (the first book he read in his childhood, excluding school books, was precisely A Holanda by Ramalho Ortigão) [The Netherlands]. Other European countries, as well as from other continents will follow, although it is the former that will merit a greater number of texts.

For the author of Casa da Malta [The Guys’ Home]: “what matters appreciating abroad, is what happens of value that is different concerning ourselves and which can spur us to change our perspective, to lead to a renewal of confidence and diligence, even if that stimulus has to work against the great wave of a majority that accepted resignation” (1969: 193). The dialogue with writers and publishers from other European countries also emerges frequently in the chronicles. The same happens with the Portuguese diaspora scattered across the European continent. For instance, in a tram, crossing Geneva, he meets four young emigrants “who have their Lusitanian identity written on their faces” (1969: 406). And he continues: “We meet them in the thousands across the world, in the prime of their lives, tough and stoic, the core of a nation that gives itself the luxury of doing away with them. On the street, in the underground, on a building’s scaffolds – wherever we come across them –, there is always something that gives them away” (idem: 406-407). In the perspective of Mário Sacramento, Diálogo de Setembro pursues, in fact, the writing footpaths of our “emigrant writers, or the ‘estrangeirados’ [Portuguese intellectuals who were admirers, followers, or practitioners of foreign styles in the Arts] * from the Illuminist period (and, in particular, Cavaleiro de Oliveira)” (s.d.: 179).

The theme of the 1965 Geneva Encounters, “the robot, the beast and the man – for a definition of the human” (1969: 20), reveals the organisers’ interest in the reflection on what separates, above all, the man from the machine since, as stated by the Portuguese writer, faced with “the elements supplied by the machine and the services it renders to us, the human behaviour will have to change” (idem: 109).

Fernando Namora did not witness the fall of the Berlin Wall, in November 1989 (he left us at the beginning of that year), so, the Europe he questions and describes is kept within the boundaries that resulted from the Second World War and, consequently, of the so-called Cold War. In his travel chronicles there are several references to the political regime of the countries of the so-called Eastern Bloc. This way, in spite of the “melancholic austerity” (1979: 35) of East Berlin, he praises the city and its inhabitants, a “laborious anthill, that does not intend to be the banner of anything and does without the superficial smokescreen of abundance” (ibidem). Thus, he understands that East Berlin “knows what it can actually own and exhibit, but it also knows what it will own tomorrow; consequently, it opens wide avenues, with traffic solutions for the cars that will one day be distributed to its inhabitants (one car for every three people is predicted), multiplies hotels, offices, accommodation facilities, theatres and department stores, it piles up restaurants at a height of 210 metres” (idem: 35-36). Now, ironically the referred development will only happen after the fall of the Berlin Wall and the consequent reunification of Germany.

In another chronicle of this book, he analyses and describes Finland as “a country already unrelated to Europe” (idem: 120), and he is very positively surprised by the link the Finnish people keep with nature and culture, highlighting, in particular, the reading rates of a population of approximately 4,5 million people, with around 3000 public libraries that “absorb a considerable amount of the editorial output” (idem: 164). And he stresses the fact that a “good percentage” (idem: 152) of the working class is made up of women. He also stresses the Russian woman dynamism at work (vd. 1986: 97). Meanwhile, the Scandinavians’ “happiness illness” emerges in Os Adoradores do Sol [The Sun Worshipers], where he sketches a skilful diagnosis of the Nordics’ wealth and boredom.

The author of Sentados na Relva [Sitting on the Grass] would return to Finland in 1979, to take part in the writers’ International Meetings in Mukkula, near the city of Lahti. The problems posed by the translation and the existence, or not, of a dictatorship, or “new terror” in the words of Bernard-Henri Lévy (one of the best-known participants), in the communist countries”, are exhaustively debated in these meetings, whose theme was “The literature as a universal language”.

Fernando Namora, like Eduardo Lourenço, places France at the heart of the History of Europe: “It is said that, when France is sick, Europe gets the fever, to which one may add: when France agitates, the world goes on alert. Thus, maybe the shout [of May 1968] had a wider echo and its resonances will be more decisive. Like in 1789” (1979:179).

The Europe of the hippies, of May 1968, of the provos (a rebel group of young people, born in Amsterdam, whose name derives “from the word correspondent to provocation” – 1974: 79) and of the drugs, is as scolded by Fernando Namora as the consumption society, “with no goal but profit, with no target but domination and privilege” (idem: 83). That Europe, as well that of art as mere amusement, thus colliding with the humanism of Fernando Namora, erected upon the Christian values that cross with family, solidarity and the relentless search for dialogue with the other. Humanism that never abdicated of the “kingdom of dream” (1974: 120) built, one day, by that kid from the province, in the pages of the book A Holanda by Ramalho Ortigão, and who always believed in the kingdom of Man, without God, nor gods to redeem or condemn his passage through the Earth.

*Information added by the translator.

“The expected [Swiss] landscape, so diverse from that of our Iberia! In Spain, for example, the landscape is an explosion. Be it the nudity, be it the opulence, everything is sudden and violent. All is flooded in a bloody glory. Sometimes, it is a triumphal shout and all of the world hears it; other times, it is a pathetic joy that, in the same way, demands the world’s weeping. Joy and bitterness are not to be found alone, even if they are soaked in loneliness. Observe: this Swiss landscape, like a bound paradise, comes to us, sluggish, vain, or indifferent, but always without harassing; Spain’s, roars, roars, at a distance.”

“This way, [International] Meetings serve Geneva and, beyond the obvious jealousy between cantons, that pretend to ignore, or to show indifference to what happens in the neighbours’ house, they serve Switzerland. It is money well invested. And, in a country that respects money from the cradle, that is particularly severe with theft, a crime bigger than the biggest, that does not condone money being uselessly thrown out of the window, it means a lot that since 1946, without a fault, it has always collected the necessary funds to make this initiative endure. […] To argue without academic niceties, nor lounge finesses, but without a brawl either. Here, one relearned to engage in a dialogue.”

“The system that abolished misery and unrest, democratised culture and enlivened the country’s economy, distributing welfare without, however, displacing the financial oligarchies that the neo-capitalism strengthened, found itself facing monotony and boredom – because it lacks the contagious mystique that does not allow the peoples to lose the ability to question. Symbol of wealth, Scandinavia is now also the symbol of a civilization that failed concerning a collective, free and unalienating determination and also concerning the mobilisation of the individual want within a common heritage directed towards hope – although its material accomplishments, founded on the good productive and good consumer individual, are impressive. It is a fire that does not burn.”