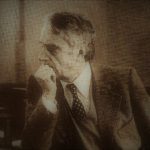 Vergílio António Ferreira was born in Melo, a village in Gouveia county. Europe appears frequently in his fiction, essays and diaries, especially from the moment in which he becomes the figurehead of existentialism in Portugal. The final pages of Mudança (1949) [Change] witness the new post-Second World War European scenario, which motivates the rupture of the book’s main character with his past as a sympathizer of Nazism, with the consequent drift towards a heterodox thought, markedly existential. As pointed out by Luís Mourão (vd. 2003: 61), in the explicit of Mudança the narrator seems to forget the past of the main character to start thinking with him, which will constitute one of the main causes, we would add, of the vergilian fiction turning from the neorealist novel to the existential one.

Adriano, the protagonist of Apelo da Noite (1954, but edited in 1963) [Appeal of the Night], a novel with clear reminiscences of Malraux, debates in his circle of friends and companions the antinomy between the intellectual and the man of action, the narrative mainstay of this book, together with the freedom of existentialism of Jean-Paul Sartre. But, at a given moment, Teles talks to Adriano about a condemned Europe, in which the “future will be Asia’s, Africa’s […]. In one hundred, two hundred years, the blacks and the yellows will get the masters of ideas and arts from Europe. As Rome went to Greece. And then, it will be the end. And everything will go back to the beginning” (1989: 211). The narrator-protagonist in Em Nome da Terra (1990) [On Behalf of the Earth] will say approximately the same (vd. 1991: 156), the idea recovered by the author, at the time of the speech proffered at the award ceremony of the APE Prize – Associação Portuguesa de Escritores [Portuguese Writers Association], to Na tua Face (1993) [On Your Face].

From Alegria Breve (1965) [Brief Joy], the narrative frames of the vergilian fiction present a Europe submerged in an inescapable values crisis. Actually, Em Nome da Terra he summons an ageing continent (vd. 1993: 16) allegorically envisioned in a nursing home where his narrator-protagonist lives. In this novel it is also remarkable the episode of the fugitives from the Spanish Civil War who cross the border in the North of Portugal (vd. 1991: 123-126).

In Até ao Fim (1987) [To the End], Flora applies for a three-year lectureship in Greece, separating herself from the narrator-protagonist (Cláudio) and their son, Miguel. From Greece, she writes her only letter to Cláudio (chapter XVIII), in an episode which denotes the vergilian comic, especially in the parody of philosophy and the myths of ancient Greece. In spite of the humoral tone of the epistle, Flora makes the panegyric of the return to the beginning alongside the renaissance of the European man, which is still an echo of the last aforementioned words of Teles in Apelo da Noite. The final episode narrated by Cláudio describes a terrorist attack on the French embassy, led by the son Miguel, who dies in the confrontation with the security forces. And we are back to the incipit of this novel, that is to say, the wake and Cláudio’s dialogue with Miguel’s corpse.

The existential and humanist thought of Vergílio Ferreira was shaped by the reading of the Greco-Latin classics and St. Augustine, Pascal, Hegel, Dostoyevsky, Husserl, Jaspers, Kafka, Malraux, Heidegger, Sartre, Merleau-Ponty, Camus and Foucault, among others. And the great philosophical, social, religious and political questions that befall Europe in the second half of the 20th Century find in his literary work a singular repercussion, not only, as we saw, in fiction, but also in essay and in diary.

In essay, Vergílio Ferreira keeps, as we noted, his stand as the head figure of existentialism in Portugal. He states the importance of the so-called Nouveau Roman which he associates to structuralist philosophy. He adheres, in formal terms, to the Romanesque proposals of the main scholars of the Nouveau Roman, not sharing, however, the emptying of the subject and the consequent reification inflicted by his characters. Thus, “to the totalisation of nothing, of the pure absence that is proposed by the ‘new novel’, the existentialism opposes the community of a condition. If the condition is judged to be absurd, he accepts the severity of it and seriously confronts it” (1978: 196), as can be read in the essay “Situação actual do romance” [The Novel’s Current Situation] that defines the theoretical coordinates of his literary critique. Meanwhile, he writes “Questionação a Foucault e a algum estruturalismo” (1993: 269-313) [Questioning Foucault and some Structuralism], preface to As Palavras e as Coisas [The Order of Things]by Michel Foucault, which provokes the polemic with the young neorealist and structuralist, Eduardo Prado Coelho, in the pages of the literary supplement of the newspaper Diário de Lisboa, between April and May 1968, polemic which had been predicted for some time in earlier texts published by both authors. Still in August of that year, he publishes in the pages of the newspaper O Comércio do Porto, “A morte do homem” (idem: 27-34) [The Death of Man], where he resumes the reflections that oppose him to structuralism. In another text, “Post-Scriptum sobre a revolução estudantil” [Post-Scriptum on the Student’s Revolution], presented in postface of Invocação ao meu Corpo, [Invocation to My Body] he observes, with pleasure, the student rebellion of May 1968 and considers it a return to existentialism. For that reason, he realises, as did Lévi-Strauss, that the structuralism “with its surroundings was […] one of the great losers of May’s revolution” (1994: 345). Thus, Vergílio Ferreira turns away from the “death of the author” of Barthes, Foucault and Derrida, and the annulment of the subject, not even agreeing with the Foucauldian thesis that “it is not the subject who thinks, but the System that does it for him” (1993: 269).

In the diary pages he reflects upon the main European events of the historical period covered by the two series of Conta-Corrente (1969-1985 and 1989-1992) [Current Account], the same happening in Pensar (1990) [To Think] and in Escrever (2001) [To Write]. The fall of the Berlin Wall in the end of 1989, and the ulterior disappearance of the Soviet Union are celebrated with joy as he had long been fighting the Soviet communism model. Actually, the political earthquake of Eastern Europe brings a renewed hope to his humanism: “And everyone will finally recognise that the World is going to start anew. And that, man will be at the centre of the restart, so that there is a restart and there is world” (1993: 270). Portugal’s entry into the European Community, the Maastricht Treaty and the European involvement in the first Gulf War constitute other grounds for reflection in several entries of Conta-Corrente. But, unlike his friend Eduardo Lourenço, he does not consider that the Gulf War was already, “in a certain way, lost before it started” (Lourenço 1994: 90) for the United States and, mainly, for Europe which will have a depressingly secondary role. For Ana Paula Coutinho, the author in Em Nome da Terra does not believe, from a certain moment on, “in Europe’s capacity of imposing itself in the global geopolitics, and not exactly for lack of material resources, but on account of the ‘endemic nihilism’ of its intellectuality” (2017: 157). Anyway, he concludes that “he was one of the contemporary writers that let himself be unsettled by an ‘idea of Europe’ – to the extent, of course, of certain matrices and experiences, in other words, according to the circumstances and the limits of a 20th Century Portuguese/European intellectual” (idem: 163-164).  Now, for Vergílio Ferreira, “Europe is not so much a geographic question as a spiritual question” (1987: 548), wherefore, despite its age, it never lets go of its faith in the European man and his capability to rise from the ashes, just like it never lets go of the idea of Europe as the “World’s capital” (1993: 57).

We have to go back to the beginning, Cláudio, we have to be reborn. And Greece is the right place for that. Not the posters’ Greece, not the Greece of Sofia and certain touristic poets. Everybody knows Greece by heart. Myself, Cláudio, what do I know of Greece? But the important thing is to know without knowing how it is to be Portuguese, without understanding that one may not like the fado. What is important is, for example, to have proof that mythology is not mythological. We should learn to be Greek like Montaigne learnt Latin, thinking it was his native language”.

“The great problem for me is the future of Europe. And for its foundation I concluded it should be limited to a question of young people. My book [Em Nome da Terra] takes place in a nursing home. That was what I envisioned 25 years ago in the novel Alegria Breve and what I gave in an article for Lisboa as an early answer and an early forecast of Fukuyama’s article. Twenty-five years ago, I related, therein, the end of war with that of ideologies, the salvation of art, a Europe of old people – in demography and in the consumption of ‘ideas’”.

“Europe, Europe. Interestingly, now everybody starts reflecting on their future. Economic, political, cultural. But it is the latter that is given less thought to and it is the one that incites us more to think. There is, however, a failure in the generalised thought of the others and that is that they do not say that thinking on European culture is reflecting on the world’s fate, i.e., the fate of a whole civilisation. Because what is at stake is not a political arrangement and what else of humanity, but that of the recovery that guides it in its own subsoil. It will be difficult, with a European Community, to articulate the strength of nationalities, which is still a myth ruling us, because it is that of our pride, with a supranational orientation, that is construed of an abdication of a part of ourselves. Defence of the old continent, facing the supremacy of other countries, such as America or Japan, fits in well with our condition of noblemen bordering poverty. But the great problem is that of the discovery of what unifies our soul and gives it what is decisive, which is rightly called ‘spiritual force’. The equality of the European fate concerning what is outward, does not need much fixing because it is its fatality. […] What is really at stake is the creation of an agnostic Europe with a vacant soul, without a value inhabiting it. What is immediately at stake for that agnosticism is the Islamic threat, with its religion heralding that threat. It is dubious that Mohammed has accommodation in every Arabic heart. But, being in almost all of them, in the others it is the dream of grandeur that memory did not forget and that it replaces him. […] But Europe has no value organising it and the multiplication of sects and superstitions – and even some religiosity – are the demonstration, not of a belief, but of a despair.