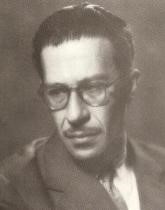 Adolfo Victor Casais Monteiro was born in Porto on 4th July 1908, having received the liberal education typical of Porto’s bourgeoisie. When he was in the academic milieu and influenced by Leonardo Coimbra, Casais Monteiro published, still as an undergraduate, the poetry book Confusão [Confusion] (1929). That same year, he assumed a position on the board of the magazine A Águia. In 1931, Casais Monteiro was welcomed at the board of the Coimbra magazine Presença, which he coordinated together with Gaspar Simões and José Régio, until 1940. These magazines were helpful in the promotion of European artists previously unknown to the Portuguese readers. Besides the magazine, the writer from Porto was a teacher at D. Manuel II high school, also in Porto. However, his teaching years did not last long, since, in 1936, he was removed from teaching and persecuted due to his anti-regime political standing. In 1954 he was forced to leave Europe for Brazil, where he would pass away on 24th July 1972.

Being a man interested in politics and the defence of human dignity, Adolfo Casais Monteiro wrote his verses in an anguish that intensified during the Second World War, when every single ethical principle was jeopardised. Actually, it was his “civic intervention of exemplary dignity” (Sousa 1993a: 23) that earned him the exile. However, even before departing to Brazil, Casais Monteiro wrote, in protest, a work titled with the name of the continent where he was born: Europa [Europe] (1946). The book, comprising a long poem about the old continent, was written between 1944 and 1945 and was published right after the Second World War.

In Europe, the Portuguese poet and critic confronted his reader with an ethical sense of “protest against the war, against the blind, monstrous and frequently absurd terror of the fights between peoples and nations” (ibidem). It is thus not surprising that Casais Monteiro had felt the need to express himself through poetry about this great calamity. In the poem, divided into five parts, he started by describing a Europe that urgently needed a rebirth, like a “Phoenix, from the ashes” (Monteiro 1946: 127), to show itself in all its glory in a “future dream” (ibidem).

In an overt criticism of Nazism, Casais Monteiro asks: “Europe without misery dragging its rags / will you come back one day? Will there be the day / when you will be reborn purified?” (128) and, in the following stanza, he answers the question in this way: “Europe, you will only come back when, between nations, / hatred will not hold the last word, / when hatred is not driven by the avaricious hand” (ibidem). In these strophes, Casais Monteiro describes a self-idealised Europe, a Europe “without miseries”, “without rags”, a purified Europe free from the “avaricious hand”. This desire for regeneration stretches along his verses that go on describing the decadent state of this continent. Europe needed to purify itself in order not to expire.

The poet asks for redemption for the evil Europe has caused, but also wishes its well-being, already existent before the war, to be shared. So, this apparent hope accompanies the reader throughout the verses referring the thematic of the death and destruction caused by the war. Such dysphoria takes up a great part of his work Europa, despite its first verses being ones of hope, purification and renaissance.

Casais Monteiro was a “Poet of hopelessness and not of despair” (Rosa 1962: 65-66), who wrote about a political, cultural and ideological Europe. Political, because the poet faces a Europe of hatred, mostly, for power. His revolt against the men who killed innocent people during the Holocaust is enormous: “What are they made of, the men / who burnt other men alive?” (Monteiro 1993: 132). When this order is broken, one loses the “raison d’ État” (ibidem) and, consequently, the internal and external orders, which also places at risk other national interests (such as security, defence, prestige, independence, among others). But we are also before a cultural and ideological Europe when Casais Monteiro writes about “this bloody pulp covering the earth” (131) and about this “war of borders” (129). In its first expression, culture was relegated to a secondary role on account of political interests. When the poet states that there is a “war of borders”, the ideological question stands out, given that ideology has a certain resilience to change, trying to impose itself as a reference which the people and governments identify with.

Casais Monteiro did not experience the conflict closely, since Portugal was not involved in the Second World War, but, nevertheless, this was also his fight when he questions: “I who have no relatives nor friends in the war, / I, being a foreigner before all this / (…) – why do I tremble and sob?” (131).

Canto da Nossa Agonia [Chant of Our Agony] (1942) is published four years before Europa and, although the reference is never a direct one, it is understood through the mentions to the war and the date of the writing (1939-1941), that this work is about the Spanish Civil War and the start of the Second World War: “reflecting the political and ideological exacerbation caused by the events in Spain (Civil War) and by the outbreak of the Second World War, he published: Canto da Nossa Agonia e Europa” [Chant of Our Agony and Europe] (Sousa 1993b: 222). To Adolfo Casais Monteiro, these two works are “a whole with a beginning, a middle and an end” (Monteiro 1959: 150).

Going back to 1934, the work Poemas do Tempo Incerto [Poems of Uncertain Time] includes a poem titled “Reina a paz em Varsóvia” [Peace Reigns in Warsaw] (1934: 52). At a time when one experienced the shock waves of the First World War and the Russian Revolution, Portugal was already under strong dictatorial measures that prevented the freedom of speech. That is why, in this poem, the poetic subject reveals his frustration for wishing to talk, sing and live, without being able to do it freely.

To finish this journey across Adolfo Casais Monteiro’s Europe, one needs to have a look at his book of poems written between 1943 and 1959: Noite Aberta aos Quatro Ventos [Night Open to the Four Winds]. In “Três Poemas de Londres” [Three London Poems], the poetic subject questions himself about his nationality: “Maybe a foreigner anywhere” (177), feeling like a true stateless person. This poet from Porto with very pronounced political ideologies, presents us a perspective of Europe in which he weaves a lyrical reflection on the real border (un)limits from a war that consequently leads to ethical border (un)limits of the world’s oldest continent.

Europe, morning that lies ahead,

nations with a candid laugh

Europe without miseries dragging its rags,

Will you come one day? Will there be the day

when you will be reborn purified?

in your devastated soil?

Will you know how to be reborn, Phoenix, from the ashes

in which the false grandeur will finally burn,

the glory your peoples dreamt of

– each of them wanting the whole of you for themselves?

if some day it will be!

Europe you did not know how

that your grandeur was not

only be bountiful of spirit

if you were avaricious of bread!

Your grandeur was made

by those who never asked

the race of those they served.

They gained your glory

your body free from shackles

in a dream always to be reached!

Europe, oh, the world to create!

Europe, oh, the dream to come,

while do not descend on earth

the voices that have already moulded

until the day it descends

your spirit over the waters!

Europe without miseries dragging its rags,

will you come one day? Will there be the day

when you will be reborn purified?

in your devastated soil?

Will you be reborn, Phoenix, from the ashes

of your divided body?

Europe, you will only come back when, between nations

hatred will not hold the last word,

hatred is not driven by the avaricious hand,

of vaults digesting the flock’s blood

– and of the dead flock, finally in daylight,

the man you dreamt, Europe, be life!

Everything here flows like a river well aware of its meanders:

the streets are streets with people and cars,

there are no mermaids screaming irrepressible frights,

and the misery it is the same misery that already existed…

And if everything is the same as in the old days,

despite Europe being around us, exsanguinated and martyr,

I ask if we are not dreaming we are people,

with no brothers nor conscience, buried alive here,

with nothing but belated tears and a surrounding night,

a night where the early morning dawn never arrives…

if my Motherland were to be free

in the diversity getting lost all over the world…

Maybe this image will pursue me

till the end, of being nothing everywhere,

to be a foreigner in every new instant

who does not understand the language of himself.

Maybe in life it is only worth losing

by gaining another being in each thing

­- and knowing, someday, to be nobody, placing

on the chimera of time the smile

of someone who lost so much that nothing is too much…

How many times does life begin?

Everything is a start when you love!

Love of what? Of haze and silence

Rising between the past and the present?

or of the clear flutter of a laughter

that one perceives between the eyelids of the night?

Sleep in the temporary peace

Of being as if there were no death.

Do not burn the innocence

of the day that dressed you up.

of everything having an end.

Leave, burnt in the harbour,

– only the wind goes with you

with no anchor, no law.