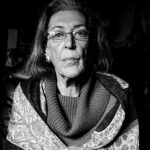 Relying on an active writing that questions and leads to question what moves us, Maria (de Fátima Bívar) Velho da Costa elaborates a textual tessitura where her passion for the world of writing articulates with a writing of the world. The author’s writing covers fiction, chronicles and drama, with some incursions into poetry, of which the works Corpo Verde [Green Body] and Da Rosa Fixa [From the Fixated Rose] are the most relevant examples.

It is throughout this diversified textual typology, that the world is being written in a more or less disruptive register that the author, sometimes giving the enunciative voice to a myriad of characters, goes on problematising the human relations and the experience of affection, inquiring what “touches us and where it moves us” (1994a: 11).

Her life trajectory, marked by travelling experiences in Guinea Bissau, in Cape Verde and in London, where she was for approximately six years as a Lecturer at the  King’s College Portuguese Literature Department, gave her some distance from Portugal which provided a more pointed and sharper vision concerning the condition of the Portuguese in the world, their future, Portugal’s relation with Europe and the way that, in a rambling manner the author considered erratic but competitive, the country goes on frustrating purposes that should be global.

Her stay in England, from which resulted the chronicles of O Mapa Cor de Rosa, [The Rose-Coloured Map] sent for publication in the Newspaper A Capital [The Capital], provided the author with a perspective on Europe, by the gauge of a power who did not know, or did not want to let go of its imperial condition and tradition, insisting on a neurotic individualism and on a classist snobbery of misadjusted stereotypes facing the new times and the new social realities (1984:147), aimed at being inclusive and fecund of a more open and exhilarating mentality, directed toward a more autonomous and creative future for the peoples.

From that observation point, the envisioned scenario was that of an economist, futile and consumerist Europe in an imminent crisis, crumbling and adrift, uncapable of solving the employment, economic and social asymmetries crises, without the courage, nor the long-term global design, erecting the verb to postpone to a non-committing programmatic motto (idem: 113). And England was quite a symbol of this habit of commanding since, already in 1975, it was denounced by the author in the Cravo [Carnation] chronicles for realising that this was contaminating the more powerful European countries, that “Rich Europe” (1984a: 92) including France whom the author also frequently criticised.

At a time (1980s) when Portugal’s accession to the European Common Market was being prepared, Maria Velho da Costa’s look is pointed and ruthless: the European integration is not more than an easy ruse of an immediate improvement of the standard of living and the final dilution of a country in a geographic space in a “Free Europe” (idem: 84) that drained the work force and the self-esteem and fostered, many times because of a colonialist nostalgia, the subservient behaviour and the self-commiseration of the poorer countries like Portugal (idem: 83).

This Europe that corrodes and abuses is, thus, faced with discredit and contempt, and blurs the exaltation that the April’s Revolution had unleashed. In fact, Maria Velho da Costa reacts with non-conformity to the Portuguese lack of audacity and is intrigued with the misconception of many, who insist on extoling what the author considers an absurd and self-destructive amalgam, that of confounding in the same move the concepts of Motherland, Europe, Faith and the West (idem: 104).

In the chronicles in O Mapa Cor de Rosa, Maria Velho da Costa does not spare the citizens’ guilt, rebuking the apathy and the absence of critical mass. The behaviours she observes in England and that she generalises to other European peoples, are those of atrophy, of passive acceptance of what happens, an acritical attitude of realising an occurrence and “consuming it”, renouncing the aspiration to a real self-determination. Notwithstanding considering that such reality is difficult to state and assume due to the accommodation to a subservient attitude that atrophies and incentivises neglect (1984: 195), MVC [Maria Velho da Costa] knows the risks of this “wake up of the Furies” as she designates the growing signs of deprivation and violence she observes in the English every day life and in the reports she receives from other countries facing steep socio-cultural and economic asymmetries of devastating consequences for social cohesion.

The ink is heavier in the novel Irene ou o contrato social, [Irene, or the Social Contract] where Europe is presented as the “scum of a continent” (2001: 112), adrift, merciless and arrogant, and without competence to manage and experience affections. In this Europe, it is easy to conceal Orlando’s identity and dissolve in the anonymous mass of the clandestine and undifferentiated workers, as long as one understands each country’s tics and knits and adapts the mask to the context (idem: 111). In it, it is equally easy to exhibit impunity in high style, clad in cold luxury and disaffection. The acronym WASPS (White Anglo Saxon Protestants), also covering the North-American culture and organisation, is the mark of the contempt for a pitiless, blind and arrogant culture, devoid of human competence to intertwine bonds and to dignify oneself in solid and constructive “contracts”, which are not those of a disenchanted and defeatist solidarity that finds its expression in the usage of euthanasia, which is also a gesture of self-flagellation by those who feel it is bringing with him the “gangrene of nations” (idem: 176).

In contrast with this mortuary Europe enclosed on itself, Maria Velho da Costa offers in her fiction the experience of crossing to new civilizational configurations. Africa, for example, seems to emerge in her texts as a solution of vitality and refreshment, in an exercise of decentring and miscegenation capable of opening up new relational ways (idem: 112). Some of her half-breed characters (check Ângelo, in Casas Pardas, [Brown Houses] or Orlando, in Irene e Myra) [Irene and Myra] seem to suggest that it is by way of the traffic between races, cultures and languages that escape routes are opened and new multiple and dialoguing interfaces are constituted. The author’s restless and deviant writing and her extolment of the galactic creole, are themselves a continuous solicitation of moving and defending whereabouts to the detriment of the address, a permanent invitation to reconfiguration.

“Because we are in a place and at a time in which everyone who has power uses it to keep it or to increase it. Where the rulers protect the rich and lure the poor, in the end serving no one, because the rich will rot in boredom and foreigners when it comes to their souls and the poor will try to be someone as they are taught and foreigners to other places. Where there is a war that does not particularly benefit the local rich and does not benefit at all the poor anywhere and that only continues because of the tiny fear of taking any decisions to stop it – or to argue and to create with the poor like us, but armed and with new faiths, or to sell it to the highest bidder. Because everything is a hesitation in this regime of servants, no one knows of whom, ever bigger because they are so diverse and disconnected, that now open a little tap here and then close another one over there, in the censorship or repression criteria, in the tricks of the very European liberals who order something to be done, only to give it up later, in the groups they let grow until they cease to be only make-believe ones.”

“Lost in the quarrels of poor relatives facing a uncertain inheritance, diminished by the courtly and national habit of  flattering a stranger, speaking pedantically as we were ordered to by the French Empire and going to the masses with the mental jeans of the freedom uniform made in USA, fearful of retrieving, now for a good goal, this fertile seam, with which the tyrants always tricked this people  – their  desire for difference and audacity concerning Europe – here in the name of a realism that is only poverty to be seen, in the name of licentiousness named liberty, we roar loud and hard, waiting for things to calm down, leaving a very mediaeval Motherland and army strive through the unknown, tightened up in a siege, without words that reconnect their effort to their origins, to the major myths of a centuries-old culture – the always postponed restauration, the belief in the disused historic mission, the tame Portuguese excess.”

“Because, on the other hand, how can this be this way and not bloat, hunger and occupation in Poland, which is Europe after all, the Tara of all of us (Americans and Russians included). Poland which was, has always been?, a serious and very old bone of contention. How can this be this way, to raise children with cuddles without employment perspectives, deplete fuel and the world’s food reserves down to the bone, to worsen everything and to know it, to see oneself, for the first time in that little synchronic eye that watches us in every international newscast, under more surveillance – to see the slide to wards a shortage that will only spare the powerful. And among the powerful, who can say they have the absolute guarantee that they will continue to be so?”