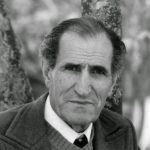 Born in S. Martinho de Anta and in debt to the vital sap of Douro’s slaty lands, Miguel Torga early on took in other Portuguese landscapes where he wandered and ascertained the nature of the Motherland and its people, relishing on the harmony in the difference he exemplified in the granite metaphor: “The granite is mica, quartz and feldspar, – but it is granite. It suffices that each ingredient is pure for the resulting rock to have the beauty, the hardness and the nobility we know” (2000a: 54).

Although he was very emotionally attached to Brazil, for having been there as a child, he knew he was Portuguese and Iberian by birth and European by education (1993: 70).

Were it not for his passport’s interdiction for a long period of the dictatorship (1974: 103), the writer would have started to cross borders much earlier, following a passage impulse he so very well expressed in his poem “Ronda” [The Round]. He was transmontano [person born in the North eastern province of Trás-os-Montes] and earthy, he made of his deep Portuguese and Iberian roots an identitary mainstay with which he proudly defined himself (1987: 175) from which he envisaged the world, however, demarcating himself from all and any, atavism smothering the horizon.

These characteristics, associated to the verticality and wholeness of his character, would make one guess his perspective of what Europa should be like: a kaleidoscopic group of sovereign countries, proud of their origins and specificities, working on behalf of a common design of civilizational development. His Europe, whose conception echoes what Unamuno defended, would be made of men and not of spreadsheets, would be founded in values and in the preservation of the identitary differences of each country, so that the community whole would benefit from each part’s “salt” (1990: 95).

Identity is, in fact, a key concept for Torga, to which he is totally committed him and overcomes in importance that of freedom (1993: 12). From it, it is understood his aversion to character-effacing policies that take away the “distinctive face” of each nation (2000a: 252) and dissolve it in a undifferentiated brew. Counter to this posture, the writer argues that each country should preserve the “fair pride of origin” (1977a: 75), in a sage and careful articulation of its individual reality with the individual realities of the other nations, towards a common design (2000a: 277).

A man with a “lively spirit”, Miguel Torga argued that the cultivated Portuguese had the mission of “going around the world in thought” (2000a: 117). This reflexive and nourished journey, as soon as it was possible for him to leave the country for the physical trips, it was moulded, specially, in his Ensaios e Discursos [Essays and Discourses], and in the pages of Diário [Diary]. The territory and the frontier defined his thought, because he considered that this was an Earth of men and he wanted to understand what kind of humans sprouted of each ground (1991c: 115).

Since the first volumes of the Diário, but also in A Criação do Mundo [The Creation of the World], it is exposed Portugal’s backwardness that, after the affirmative protagonism of the Discoveries (1993: 156), consigned herself to being “Europe’s heel” (1991a: 222). The conscience of that backwardness is frequently coated in a complaining tone for the fact that the Portuguese lack a vision of the future, the renewal impulse and the capacity to act, tied up as they are to an atavist ground, eyes set on their vegetable garden plot, without imagination nor impulse to fling themselves beyond the pettiness of their daily lives (1986: 104 e 201). With a critical and lucid eye, Miguel Torga measures the cultural and civilizational distances and points to the European qualities: magnificent ideas works, cathedrals (contrasting with the Portuguese “small chapels”), cultural vitality (and what a pity he feels that in the mid-20th Century there is no Portuguese artist with international projection!), cosmopolitism and a streamlined and enlightened spirit (1974: 134).

However, do not attribute his hurtful findings to some attitude of subservient self-commiseration. Proudly Portuguese and Iberian, he wanted the soul of the peoples to be preserved, but without enclosing, nor cultural atrophy. Consequently, he accuses, without complacency an authoritative and arrogant Europe, still fraught of a certain anachronism, of an immoral colonialist attitude but hoisted in the presumption of moral superiority, mostly represented by France (1983a: 52 e 1990a: 19, 46), but also by England (1993: 174) and by Germany (idem: 24).

His feeling about Europe, but also about globalisation, cannot be abstracted from the concept of Motherland that he defines as the “temporal splendour of a kaleidoscope of natural eternal diversities” (2000a: 277). For Torga, it is about harmonising “the body’s voice and root” and the voice of civilisation and cosmopolitanism” (1974: 151-152) in building an ideal Motherland “the size of the world” (idem). Sensitive to the distant appeal for what it entails of “spatial conquest of freedom” (1977b: 93), he recognises, as early as 1962, that the Motherlands were withering inside of us, seduced by the temptation of the universal (ibidem).

In outbursts of optimism, as the European project shapes up, Torga sees in European integration Portugal’s opportunity to measure up to “the Coryphaeus of civilization” (1987: 156), recovering an old desire inscribed in Diário I, of “opening wide European windows, next to the Iberian shutters that reveal(ed) life (to him),” (1989: 65). Europe would thus become a challenge to the Luso capacity to adapt and create, correcting amateurism and rusticity, acquiring a strategic vision, but guaranteeing that the genuine character that constitutes Portugality is not distorted through relativization or an amalgam.

Progressively, however, it is becoming clear that the European course is nothing but a common market. Thus, Miguel Torga points to the fragilities of a rendition to an economic, ideological and military yoke, without an active voice that lightens up a course (1983b: 137). Facing a Europe that “masochistically disfigures itself as if embarrassed of its noble identity” (1993: 140) and gradually transforms itself into a “dismantled loom” (2000a: 122), the writer from Trás-os-Montes showing his growing reservations against everything that looks to him as jeopardising the creative genius that guided Europe and was now crystallised in a “monotonous conception of world uniformization” (1993: 89). Therefore, he objects to Maastricht, as a result of an “usurious fever” and it hurts him that  Portugal’s integration in the Common Market does not safeguard the privileged relations with Brazil, which the country should keep, as a tribute to Pero Vaz de Caminha’s letter, regretting that the Portuguese had surrendered to the anaesthetising yoke that makes of them “first class Europeans, second class Spaniards and third class Portuguese” (idem: 149).

The last diary is, thus, a kind of Requiem for the dreamed of Europe of Nations and the Maastricht Treaty, the diabolic tool that overturned it. However, in a rebellious and heroic challenge, the stained glass of Chartres or the pages of Proust, will always be there to haunt the “pragmatic short sightedness of an era with no soul, nor imagination.” (1993: 140).

Coimbra, 11th November 1942 – When I start thinking about the man who, after Cervantes and Camões, took us to Europe with more firmness and sense, the ever-younger name of Unamuno comes to my mind. […] As far as I am concerned, the great mistake of those who, after having gained conscience of our situation, wanted to make of Iberia Europe’s land, was to try to sow on this torrid peninsular ground cold ideas from other parallels. Only the commentator of D. Quixote (and Ganivet, although with less persistence) had the genius to understand the problem in depth and to see in which due measure the sponge, without losing the right pride of origin, could absorb the dew of another culture. […] It is in such a fraternity of confessions and confidences that culture is made. Meaning: only after a good evaluation of its particular characteristics and then by welding them in the pot heated by the great universal fire, can anyone be, at the same time, a citizen of Trás-os-Montes and a citizen of the world. This was what Unamuno worked hard to teach us and to teach Europe. Actively refusing to Africanise the Iberia, or to Americanise it, or to Europeanise it, on the contrary, simply trying to extract from our intra-history our true continental meaning, he accomplished this wonder: that Europe was aware of us, and we were aware of it.

Coimbra, 1st March 1990 – […] We can never be completely free, but we can, in every circumstance, be entirely identical. Yet, if the price of freedom is dear, that of identity is double. The former can be bestowed by decree; the latter is always of our full responsibility.

Algiers, 14th September 1953 – A French policeman has just slapped a native tramp twice, right in front of me and that will cost France dearly. […]

This European Cartesianism is not convinced that every form of colonialism is immoral, be it the most materially progressive and the most socially codified. And, also to the universal and sprawling civilising presence of Christianism is always lacking one side of the dialogue: the native’s opinion. […] but everyone who is submitted will give an answer, sooner or later, regardless of having been questioned. After centuries of aggression, the Incas are responding, and so are the Aztecs and the blacks, too. And I do not think that the Islamic world will stay mute, turgid as I see, with all the energies repressed in the burnous’ folds. […] more than the power of the repression apparatus, or of the seductions of a progress that tramples the essences, is the worth of a verse’s obstinacy imprinted in the eyes, after having been caress on the lips and a calligraphic frieze in the mosques. And even more than it, is the worth of freedom. The joy of being free before God Himself.