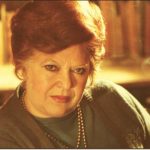 Natália Correia in her poem “Manhã cinzenta” [Grey Morning], dated April 1946 (one of her first originals of her complete poetry), addresses the event that marked all of her life-work: the departure from the island of São Miguel, in the Azores – where she was born in 1923 – to Lisbon, where she would pass away about seventy years later, in 1993. In the book Poemas [Poems] (1955), the reader rediscovers the mildly nostalgic and lucid eye of Natália in relation to her island, in “Retrato talvez saudoso da menina insular” [Portrait, Maybe Nostalgic, of the Insular Girl]. This bio-bibliographic data will interlace with Natália’s vision of Europe: a heterogeneous and devastated space, in relation to which the Ilha [Island] acquires the symbolic value of a lost paradise, a new Ithaca one wishes to return to.

In the book Comunicação [Communication] (1959), the first explicit reference to Europe is to be found. As an introduction to “Auto da Feiticeira Cotovia” [Act of the Witch Lark], Natália announces, with her singular humour, the discovery of a city called Lusitânia, located in Southwest Europe, buried by the ruling salazarista regime’s oppression. The Luso reality, that the author vehemently seeks to denounce, is, by synecdoche, a portrait of a Europe destroyed by the Second World War. The continent will be referred, together with Portugal, in the book Cântico do País Emerso [Chant of the Emergent Country](1961) – whose intertext is that of “Ode Marítima” [Maritime Ode], by Álvaro de Campos –, as an ancient place, ineradicably associated to a nation-ship, called Portugal, that time sank.

In O Vinho e a Lira [The Wine and the Lira] (1966), one starts envisioning Natália’s Europe with more clarity: a place that lost its identity. The poem “Requiem por nossa mãe Cibelanaítariadne” [Requiem for Our Mother Cibelanaítariadne] symbolises that loss: Auschwitz, place of destruction, was among the last to sight Ariadne, figure of classical mythology whose ball of thread would lead Europe back to the centre of the labyrinth, where its history started. Heir to a surrealist legacy, Natália always defended the annulment of the “obscene opposition between truth and myth” (Correia 1999: 325), wherefore Ariadne is possible in the symbolic place of the Holocaust. In fact, Natália’s Europe is a place of death, as one can confirm in the poem from the same work “As silvas do mandala” [The Mandala Brambles]: to a white Africa, Natália opposes a black Europe, colour which remits to a space consumed by fire. The Natalian poetry denounces, at every step, the precarious situation of a Europe repressed by fascism, a web-like regime where Portugal (dramatically) is also inserted. The sole salvation that seems to be left is given by the closing verse of this poem: “For love everything recommences” (idem: 275), understandable in a poetry strongly influenced by the Camonian lyric.

This same Europe appears in the singular book Mátria [Motherland] * (1968). In poem I, one glimpses a “europe” in ruins, burnt, written with a lowercase letter. In poem IX, Natália declines the reason the disappearance of Anaíta, primitive goddess of earth and fertility, root of a Europe marked by the triviality of evil, famous expression of Hannah Arendt. In A Mosca Iluminada [The Lightened Fly] (1972), Natália returns to Auschwitz, but she does not forget Hiroshima either. Every place where there are visible signs of evil fits in Natália’s poetry. Right in the following poem, the desire for the Island, place of absolute purity, materialises. The text “In the pit of the most accredited dictionaries” devalues the dictionary definition of the term island, and emphasises it as a unique, mysterious place, perfect object, as distant, “a mother who encloses herself in her own insanity of a dead person treading daringly in our arteries” (idem: 315).

Natália goes on revealing her vision of Europe in a disperse way throughout her poetry. However, she ends up centralising her eye on the old continent in 1973, in a book titled O Anjo do Ocidente à Entrada do Ferro [The Western Angel at the Entrance of Iron]. In the text “In the saddest topaz of my clairvoyance”, the author cries “ash clovers throughout Europe” (idem: 361), a continent she describes as a “sad little widow”. The poem “Dedicatória” [Dedication] synthetises Natália’s eclectic vision of the European continent. She addresses the classical myth of Europe, underlining the desire as central in the formation of the old continent’s identity, described as a place of heterogeneities, profoundly associated to a Judeo-Christian tradition, space of permanent fight for power. It was also the cradle of a civilisation, scene of political and industrial revolutions, moulded by many timeless myths that defined its identity. More than a geographic entity, Europe is, for Natália, a cultural entity, founded by pre-classic civilisations, symbolised in Crete, of which only ruins remain. It is this context, that frames the poem “Excursão às ruínas da valsa” [Excursion to the Ruins of Waltz], where Austria appears as “the fallen jaw of Europe” (idem: 367). Further on, in “Do sagrado meretrício” [Of the Sacred Lewd], Natália dialogues with Rome and looks for a sense for the “putrid century” which the European culture flowed into. She wraps up this book with a five-part poem, “Pranto dos europeus à saída do festim” [The Europeans’ Wails Exiting the Feast], she clamours for a Europe that existed one day, lost in hatred and wars. Natália’s interrogations significative of the inexistence of a route for the old continent, a day fertile in heroes and fed by dream: “What direction to take?”, “What did we make of the trees?”, “What is left of the field of recent sunflowers?” (idem: 400-402). An answer does not seem to be given to the reader. However, there is a salvation: “the performance of the bones that search / the centre of a caste and the eternal fixture / where the gods stare with the coldness of jewels / and life waits for us to resurge for good” (idem: 402).

The last poetry book in which Natália addresses Europe dates from 1976 and it is titled Epístola aos Iamitas [Epistle to the Iamitas]. The poetic reflection is framed in the post-revolutionary context, where Natália keeps her critical voice and concludes her lack of propensity for revolutions like the one of the 25th April that, according to the poet, failed in its purposes. The main revolution remains undone: “the opening of the human psyche to the wholeness of the being” (idem: 413). The references to Europe appear, like in the first works, crossed with references to Portugal: in poem III, Natália projects the failure of the Portuguese revolution in Europe and in the set “Urna Áurea” [Golden Urn], constituted by three sonnets, there are the last references to Europe, with clear traces of a mystic-Pessoan nationalism assumed by the author in the book’s introduction. Natália’s beloved Motherland, face of Europe, does not see an end to the decadence denounced by Camões in the reflections of his epic poem, does not see an end to the fog announced in Mensagem [Message] by Pessoa. Resorting to motifs from the book Apocalipse de S. João [St. John’s Apocalypse], Natália prophesises a future Portugal, with a Pessoan tone, that will recover her dimension before Europe. After this book, we believe that the references to the mythical continent disappear from the Natalian work. Driven by the urgency that “poetry may be practiced” (idem: 33), as in it “the transformation of humanity’s soul is incubated” (idem: 34), Natália clings to the hope of a reborn Europe, with a Motherland that will provide still more chants to be listened to, hope that surges from the synthesised faith in her sonnet “I believe in angels who crisscross the world” (idem: 616). After all, the poetry of Natália does not self-destroy, but it is renewed by dream, by the word and by the Love that makes the Work: “I believe in the incredible, in amazing things / In the world’s occupation by roses / I believe that Love has golden wings. Amen.” (ibidem). It is left for the reader a possible image of the future paradise: a new Europe peacefully invaded by roses.

* Information added by the translator: in Portuguese, one refers Portugal as Pátria, which corresponds to Fatherland in English. Calling it Mátria, which does not exist, corresponding to Motherland, Natália Correia conveys a socio-political message.

To you, oh water dance thrusting banderillas into the bull

that kidnapped you in the river in the horn’s crescent

that the full praise you were of a quadruped desire

of God working the cross of your womb

the egg moulded to the vertical nap

of a history standing asleep in the cathedral

To you, from Crete raising the slow trunk

in centuries of ivory showed the patience

of the metal work that now chokes you

in fraudulent chronicle of a photograph

To you, that the rebellious gastronomical distances

of the oceans were the Summa Theologica

cruciferous and crusade of syphilis and blue

in the north garnering what you spend in the south

To you, who in an English commercial writing

the camphor you stole from the oriental sleep

in effect pepper of the exotic dishes

of a colonial menu gnawed by mice

To you, oh insatiable who to change the rings

of the kings decapitated the hazy capitals

with the capitalado of the new captains flouring the

pretending to be tetrarch (that another cloth does not keep the

intimacy of your arches)

ironing with the goo of the bourgeois bronchitis

when there at the Bastille won the spade of the

Of the sacristies blessed mouse when logic

unsteady of elephantiasis with a telescopical trunk

of the moons breaking in the lakes of paraffin

that heaven ends up empirical and rabid biting

To you, laborious laboratory anther

with sages’ pollen in the rose test tubes verifying

To you, victorious who answered everything

In the cavernous language of examined wound

To you, oh polyphonic instrument of pistons

with swamp and quivering in the tuneless voice

by the spurious Decembers of machines that cradle

your limbs in frost

electric shoulders falling in brackets of bar and

To you, illuminated by the gas of fie

of lacklustre brown of a Greek amphora

playing the blindman’s game with a blindfold of ads

To you, oh acrobat on the wire who goes from the bog to the armoury

With scrap flats from your requiem raising the

To you, composite slut of ionic and of gain

Weighs again in the adage of Christ’s sonata

in an igneous membrane of clogged America

with final judgements painted on your ceilings

To You, however I dedicate

the reason of the Lira I inherited in globules

blood of your making cithara’s paragraph

raised in the horns of the god who, in musical

boiled in the blast furnaces of the sky in liberty

the icy faience of immortality

To the leaven of the origin that provoked your breasts

Ring in the tears you play in the ankles

To the zodiacal spaceship that tamed the curves

Of your infused hips of philosophical milk

curdled in semiquavers of concrete and metal

to the arcane patient who, with the syllable-like amble of the

metrified your brain of fables and flutes

to the plane trees that suffer in the Cretan medal

from deep in your eyes, your rounded pain

in the gloomy pronunciation of phone lines

We called Europe to the place where it stopped

the blood that the six-pointed star searched for

where the body’s thirst finally took it to the soul

Forgotten the letters that the obscure flame

they could extinguish bloodied the book

What is left of this field of recent sunflowers?

with plastic strawberries and lost children

by an arithmetic of voices without a destination

We certainly dressed up in premature flesh

and in this chiaroscuro of temples and disasters

the centre of a chaste and eternal fixture

where the gods stare at us with the coldness of jewels

and life waits for us to resurge for good