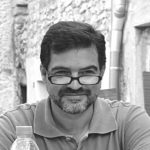 He published three poetry books: A Função do Geógrafo [The Function of the Geographer] (2000), A Ordem do Mundo [The World’s Order] (2006) and Europa [Europe] (2015). The former two were translated in several countries, like Belgium and France. Besides these volumes, some of his texts figure in several anthologies and collective publications, both in Portugal, and in some European and American countries, which demonstrates the wide reception spectrum of his poetry.

In Europa, the poet explored some questions inherent to his individual vision of the old continent. This work includes several lyrical texts already published in previous volumes, although later modified. In this respect, these poems should be noted “Sabias ser o augúrio a adivinhação do futuro pelo voo das aves?” [Did you know the Omen is the Divination of the Future Through the Bird’s Flight?] (Cóias, 2015: 12), “Poderás afirmar” [You Will Be Able to Assert] (25) e “Estreita o passo ao avistares a encosta dos rios” [Shorten Your Step when You See the Rivers’ Slopes] (20). Consequently, one can realise that, in Europa, Rui Cóias undertook a meticulous work of erasure and rewriting, not only transmuting the strophic organisation of several poems, but also the punctuation and the lexical range. At a deeper level of analysis, maybe this poetic reconstruction will enable one to mimic the reconstruction that poetic persona aims at in some textual segments, “as if [he knew] all of the hope” (35).

One should also pay attention to the title of the book – Europa –, which seems to point, in an explicit way to an evident reflection about this continent. However, the poetic texts included in the volume counter this semblance of thematic clarity. In the fifty-one poems that compound the book (and excluding the final text in prose), the lexeme “Europa” shows only two occurrences – in “«We do not distinguish clearly what matters” (43) and in “While we are there, not even” (87-88). More than naming Europe in its entirety, the author resorts to the evocation of multiple landscapes and European geographic zones, so that, through them, one sights each ruined space. Thus, it is believed that this option operates, not only as an aesthetical tool, but also as a reading guideline. Meaning that, besides being able to take, metonymically, each region as a synonym of the grief brought upon the countries devastated by the Great Wars, these references can constitute a mental road map for the reader.

It should be noted that the cosmovision of the old continent as pointed out by the author is assumedly dysphoric from the beginning, since the European territory is, in his words, losing its territorial and ideological essences, depersonalising itself and “paling, inch by inch, in a scarcer link, / in cities, pastures, and harbours, which are a part of us, / trembling in agony” (11). In this scope, and retrieving Pedro Mexia’s perspective in the text published in the book’s flap, it is possible to state that the Europe which Rui Cóias aims at presenting, besides being culturally and ideologically melancholic and destroyed, ends up exhausting itself, at a geographic level, in the battlefield trenches. Such note seems to bolster a communion between time and space: “At the minor misfortune one lass is enough / to ignite in the trench the night’s starry finger, / be it emanated from a stream of houses or mixing up in the empty night” (66), “time which is a hard distance” (13) or “the West simulates the unknown, and the borders gravitate” (43).

In this confluence, one stresses the fact of Europa being depositary of a strong image component. Along its pages, the poems’ reader is driven by the lyric subject – an inspired voyager in Baudelairian flaneur, marked by the bloody trail left by the battles and the steep decline of the surrounding environment – to diverse physical spaces, that mingle with psychological spaces, through the exercise of rememorating. So, the poetic persona, moves between disturbing landscapes of a melancholic past, in the ashes of the West which is presented as “pure horizon” (41), vague memory of a solid project of prosperity, transformed into “devastated land”, alluding to T. S. Eliot’s expression: “saying: here we are, as we were, look/ there goes our star that accompanies what we were in another life, in another road” (20).

It matters to finally recover the dual role of reminiscence. If, on the one hand, memory can constitute an omnipresent element in the poems and be an adjuvant of the melancholy of the poetic persona, that describes the old continent through more or less concrete dysphoric elements (such as ashes, graves, or blue lichens), on the other hand, it seems to suggest an attempt at a catharsis, both of the subject and the territory that the former goes on verbally revisiting: through “plains remained despair, / the lilac pain of  wrecked men” (32). Notwithstanding, the anamnesis remains: “plays the most beautiful stories of the world / in the solitude of all hours crossing each other” (72), maybe sketching a distant recomfort.

In one of the poems in Europa, one can read that “the hands raise for those who die” (88). That seems to be one of the main aspects of the texts that integrate the work, acting as a memorial of a devastated West, where the spatial-temporal and ideological frontiers were depleted in vestiges of depression in those who experienced the Great Wars confrontations: “Europe, at the feet of an / extinct braid, sheds with us / the ashes of its frontiers” (88). Paraphrasing Rui Cóias: let memory be the function of the geographer and let us not fall sleep unnoticed (cf. 51).

«We do not distinguish clearly what matters,

We see what we can see, clearly, we discern nothing,

but the West simulates unawareness, and the borders gravitate –

Throughout countless Winters they stayed in the North,

and in twenty days and nights, of indigence, the founders

turn to the sea and shout, joining the chant to the continuous voice;

they did not fear what they were singing, but what is audible,

which, from above, from the silence, possesses them, in the landscape;

and praying to future predictions, like the ancestors did,

set the fires in the ravines, fear for the families,

the women who await them in the cold disguise of the eye,

caressing the children, covering the braid under the shawls –

«Where the wind does not go light candles, scrub the coppers;

Braid the hairs where the olive oil smells you join hands

And in the years that pass, in one of them, will be born the one who mirrors

the marbles’ groove, and the dunes of Europe,

he will speak of the sense of looking at another border, the closest one,

and he will rise in the mornings that whisper his name.

In Spring, of long years, in the sun,

We fought one and the same battle, and today

As the feeble candles that become dust burn

We go up this hill, regarding the Western sky

In which we see ourselves familiarly in a new light,

We think that nobody can, maybe, touch

the obscure oblivion in which the illusions are

destroyed, without muttering for them the

dilacerated marks and the blood from the decades, in which

we vaguely submerged in the blurred solitude of the world.

In emptying his day, of solitary harshness,

everything adjusts in greyish hairs since infancy,

everything adjusts continuing his wreckage,

a lost mercy, that calls before us,

we mull over the inextinguishable sadness,

the tender listening of our parents, behind the shoulder,

cradling old mornings that do not let go of our hand,

in the wort, of the ancestors, of our death.

Where there is life like this, the dead palpitate for the

inseparable piety of these unparalleled eyes

that go on endlessly following us and what

is conveyed and that we will convey,

through tacit words through which grooved

the questions that make us pious, marks

the affection of what we are, and know we will be,

of what will call us by our names, and for our Europe,

thus, telling us about this available bread of ours,

thus, marking the blue drops of the tributaries,

resonate to leave the day that will never return

and that, without us understanding, even without help,

sobs under the bed of all beloved eyes

in which part of the soul in the world, or the world

unbroken in an interlude, of finitude

of this seized crystal of today and tomorrow,

raises the dead mermaids from the memory

that from the shadows, close and distant

croak in the pale roar that we go stepping on

drinking the ash of what was, some time, the West.