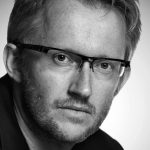 David Van Reybrouck has amultifaceted scientific and cultural career. He is an anthropologist, an archaeologist, a historian, a chronicler, an essayist, but he is also a dramaturge and a Dutch speaking Belgian fictionist. Coming from a Catholic Flemish family, he studied philosophy and archaeology in Leuven, having followed anthropo-zoology, a scientific field about which he has published some studies of renowned significance.

In 2007, he definitively breaks with academic teaching and scientific research, focusing entirely on literary and essayistic writing. He published several works in Dutch that were translated to French: Le Fléau [The Scourge] (2008); Mission [The Mission] (2011); Dans le maïs [In the Corn] (2012) and Congo, une histoire [Congo: The Epic History of a People] (2012), an essay awarded with the Médicis Prize, in which he revisits aspects of the Belgian colonial past in the Congo.

The essay Contre les élections [Against Elections: The Case for Democracy] (2014) caused some controversy in a country which is hard to govern, as is the case of the Kingdom of Belgium, passionately advocating for a return to the old practice of the drawing lots as a possible resort to reinvigorate contemporary democracies whose electoral systems show signs of exhaustion.

In 2016, in a European context profoundly marked by the terrorist attacks, Van Reybrouck and Thomas d’Ansembourg publish a pedagogical essay, La Paix, comment l’apprendre? [Peace, How Do You Learn It?] in which they advocate the teaching of peace just like any other school subject, as an integral part of sustainable social development and as a way to cultivate a citizen interiority.

In 2016, David Van Reybrouck publishes a novel, a mix of documentary and fiction, titled Zinc, in which, his utopian and somewhat populist political ideas of self-managed governance, find a geographic space and an historical time in the small border village of Moresnet-Neutro, a small German-speaking county, definitively annexed by Belgium following the Versailles Treaty (1919), but whose autonomous status was, till then, respected by Germany (Prussia) and The Netherlands, joined by Belgium after this kingdom’s foundation in 1830. Moresnet-Neutro was disputed and claimed by these three European states and it metaphorizes and condensates a certain idea of Europe as a border region, of a liminal and border region between the Germanic and the Latin areas of Europe, heir to an intermediate and central territory of the old and mythical post-Carolingian Lothringia: “A sombre excitation at the idea of crossing a border?”

Zinc, that won the 2017 European Book Prize in the “novel” category – an award introduced by the European Parliament with the intent of fostering the adherence to the European spirit and project –, propounds to revisit and unearth all of a forgotten and conflicting history of the European construction, but it also reveals a unique and sporadic case of coexistence and cross-border and trans-ethnic self-management  at the heart of the old continent.

In effect, the neutral and undefined status of Moresnet-Neutro, kept between 1816 and 1919, very much due to the existence of an important and very old zinc mine in the village (La Calamine) coveted by the surrounding states, enables Van Reybrouck to illustrate, historically, his political theories of direct democracy or local improvised political compromise: “The compromise consisted of an absence of compromise [….]. This zone became neutral territory”.

The novel’s elaboration associates the historical and documental research with the gathering of testimonies by local inhabitants and plain fiction. In fact, Zinc fictionalises the life of Maria Rixen, a young domestic employee from Düsseldorf in the early 20th Century who, because she got pregnant from her boss, is forced into exile, picking the neutral territory of Moresnet for shelter:

She can take the train to Cologne going south along the Rhine and then skew westwards, across the Eifel towards Aachen. From there she can reach the neutral territory, eight kilometres away. She knows it is not large, not more than 1347 Prussian arpents, but in this miniscule State of Moresnet-Neutre one feels less repressed than would be the case in Prussia’s extensive territory. There are other girls from Germany, from Belgium, even from Switzerland, who sought refuge here. People leave them alone.

The birth of her son, Joseph Bixen (meanwhile renamed Emil), in this stateless county, makes of him a “neutral”, being “this category reserved to the descendants of inhabitants of local origin” and involves him in the tragedy of the First World War that befell Europe and, particularly, the cross-border territory of Moresnet. At the time, the population split, taking different parties according to personal and family circumstances: “I try to visualise the conversations, the tensions and the silences of the time”.

Germany annexes this Germanophone territory she views as hers, and the youth is immediately mobilised:

In the annexed territories, more than 9000 men were mobilised, 3400 of whom were killed in combat, or missing in action, 1500 others came back as war invalids. The burst of pro-German feelings was nothing but a flickering flame. Belgium, or Germany? The border region was orphan, powerless and, just like Emil, deprived of parents he could be proud of.

In the Versailles Treaty, Moresnet-Neutro, which at a point was a centre for the diffusion of the Esperanto language, is officially incorporated into the Kingdom of Belgium until the Second World War. Once more annexed by Nazi Germany, such as the whole Belgian territory, it became again the stage for confrontation and identitary dilaceration. The Germanophone Belgians are once again forced to fight side by side with the Germans. Emil deserts, wanders across the neutral territory until the Allies’ liberation. However, his personal history makes him, irremediably, a suspect. Which side were, are you on?

In the 1950’s, the zinc mine, economically not very profitable, is deactivated, while Moresnet definitively integrates Belgium’s Germanophone community.

Zinc thus presents a singular reading of the old continent’s History, which refers to two pressing issues of the present: the crisis of utopia and the European project, and the return of borders as a on the ground materialisation of the resurging nationalisms and identitary selfishness.